Innovation at the platform level (whether it be improved hardware, changes in infrastructure or new ecosystems) has always led to new opportunity at the application level for both entrepreneurs and the investors that back them. As 2016 winds down and we look ahead to 2017, it’s as good a time as any to take stock of the innovation we’ve seen at the platform level in the last few years and the trends in tech that will drive new opportunity in application software.

More specifically, I see four core and emerging trends that will continue to dictate opportunity in B2B software: (1) continued dominance of cloud, (2) acceleration of mobile enterprise, (3) increased attention to AI (more specifically machine learning) and (4) the rise of AR & VR – particularly AR in the B2B setting. The figure below provides an overview that will be explained in further detail below: 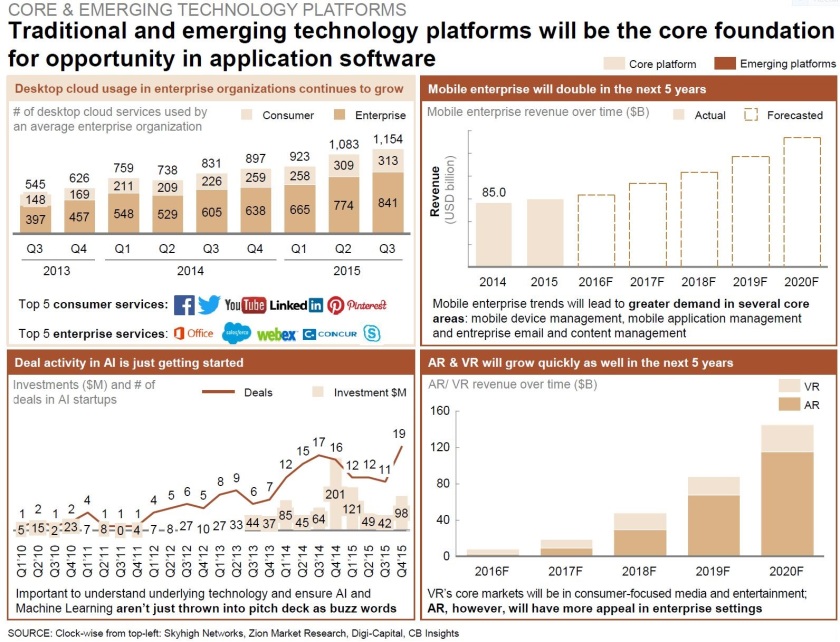 This is an “old” one but a good one. Of the four platform trends this is the most established one and has produced the most opportunity to-date.

From a horizontal perspective, the cloud has penetrated (though not yet dominated) every function within the enterprise. Salesforce is the prevalent choice for most in the sales / CRM functions. Companies like Workday, Cornerstone and SuccessFactors have gained real traction within HR. Eloqua, ExactTarget and Marketo are widely used marketing tools. NetSuite has a strong presence in ERP while Zendesk is a strong force in customer success. And there are many other more recent horizontal SaaS companies that have made big waves: Slack, Stripe, DocuSign and DropBox are just a few of many that had big years in 2016. And there are many more opportunities remaining in relatively untouched areas like: sales ops, SMB-focused HR tools, inventory management, market intelligence and customer care analytics.

Vertical software, is still very much in its infancy. There have certainly been some early winners like Veeva (life sciences), RealPage (real estate) and Fleetmatics (fleet management), but there are many more industry cloud winners to come. Industries like manufacturing, construction, logistics, agriculture, oil and gas and others have slowly begun moving to the cloud after remaining cloud-allergic for many years. 2017 will be a big year for many of these industries and the vertical-focused, category-winners that reshape them.

Aggregate mobile enterprise revenue in 2016 was just under $100B –pretty solid for a platform that didn’t exist 10 years ago. However, this one is also just getting started. Forecasts show this number doubling by 2020 (and I wouldn’t be surprised if the growth rate is higher than that). Part of this growth is fueled by increased vertical software opportunities. Procore is a great example of a company delivering a vertical specific solution (in construction) via mobile enterprise. Industries like education, insurance and real-estate will soon follow.

2016 really marked THE year when AI (or more accurately, machine learning) really came into focus in the startup and venture community. As seen in the figure above, deals done and investment dollars poured into the sector have grown exponentially in the last 2-3 years. In that time, AI has done a few interesting things:

Expect AI to be a powerful trend in 2017 and beyond, with both startups and established players getting involved, especially as the technological innovation becomes more advanced.

AR and VR are the furthest off in terms of real platform potential and 2016 was largely a pretty big disappointment for these platforms. The biggest thing in AR/VR in 2016 was Pokémon Go, which was an entirely consumer play (and appears to largely have been a fad). I expect VR to still be a few years away from going mainstream –and even when it does, it will continue to be a consumer play.

That being said, I do think in 2017 we will see the start of some AR-based software applications that will gain traction among enterprises. And by 2020 forecasted revenues in AR will near $120B. Some of the important early verticals AR will start with will be healthcare, manufacturing, defense and architecture among others. Some of the early startups playing in these spaces, that I’ll be following in 2017 include: CrowdOptics, APX Labs and Pristine.